skip to main | skip to sidebar

Koro or incense burner in the form of a seated hound wearing a bell on a cord, of cast and cold chiseled yellow bronze. Early Edo Period, 17th century.
From the Azuchi-Momoyama into the Early Edo Period, it became fashionable for Daimyo to keep large numbers ofkara inu or foreign dogs of both the mastiff and hound types. Imported from the continent and from Europe many times, these foreign breeds were characterized by large bodies and dropped ears. Kept for both ornamental and hunting purposes,kara inu are depicted in byobu or decorative screens of the period but rarely became subjects for bronzes such as thiskoro. In the 19th century dogs became a popular subject in Japanese art, but the later depictions exclusively focus on native Japanese breeds such as the Akita inu or the imported Pekinese variety fashionable during Meiji. 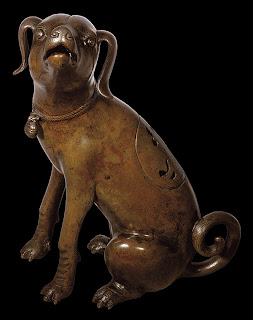 In 1868, following the downfall of Japan's military government, the Emperor Meiji was restored to power. Japanese artisans, particularly metalworkers, lost their traditional samurai patrons and were obliged to find new markets for their skills. Emerging from its feudal past, Japan developed as a modern industrialised and economic power. It employed western technicians and advisors to work with Japanese artisans in developing new and improved methods of production. At the great international exhibitions that were then in vogue, Japan displayed its traditional arts and crafts, as well as other forms of manufacture. The objects illustrated here illustrate many of Japan's traditional metalworking techniques, such as bronze-casting, patination, decorative inlay and chasing (fine working of the finished surface). These had previously been used to great effect on arms and armour for the samurai, but here they have been transferred to purely decorative objects. Like other forms of art produced during the Meiji period (1868-1912), these pieces illustrate a fascinating fusion of traditional Japanese techniques and themes with western forms and ideas.